The entire world has greatly benefitted, free of charge mind you, from technologies created by the US space program. Camera phones, scratch-resistant lenses, CAT scans, LED bulbs, and memory foam are just a few examples of technological advancements that people everywhere enjoy with origins from NASA. Just as with World Health Organization and the United Nations, American taxpayers have born the brunt of the money invested in space travel, and the technological advancements produced therein.

So why does the BBC want to put a worm in that apple? They hate President Trump, that’s why.

In an article written by BBC journalists Manish Pandey and Michael Biggs, in which the two could find nothing but positive things about President Trump’s all-American desire to return man to the moon for the first time in a half-century, they could not help but whine and snark. Even their photoshopped image mocks the president. 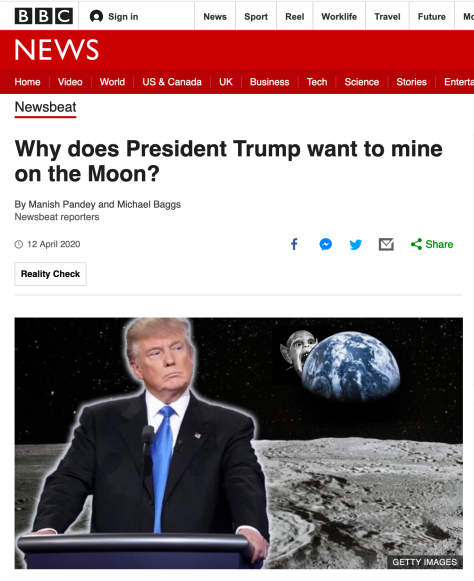 The following is what the BBC wants their readers to ultimately see as the answer to the question, “Why does President Trump want to mine the moon?”

“There has been tension between the US and China since President Trump came to power, and Benjamin says (going to the moon) is a chance for him to assert “dominance and leadership”.

Sorry BBC, but tension with China is not Trump’s fault. There has been tension between China and the US since 1949. We aren’t the ones who threw Hong Kong under the bus to relieve political tension with communist China.

“The US has lost the (global rare earth) race – other countries are ahead, like China and Russia,” says Benjamin. “Materials mined by China have been made available around the world.”

“It will be really attractive to people like President Trump if you are able to get minerals in a place where the Chinese aren’t – like space.”

Huh? China is a benevolent nation that spreads rare-earths among all nations like Santa Claus? Maybe somewhere in the multiverse, but in our dimension of reality, China charges so much for rare-earths that a lunar mining operation might just be a cheaper way to go.

“The (executive) order… said the US did not see space as a common area for resources, and didn’t need permission of international agreements to get started.”

“President Trump’s order is clear that international law won’t apply to US efforts in space – but laws about what humans can do off-planet are less well defined.”

And that, dear BBC, is why you are protected by the United Kingdoms Skynet satellite defense system, and the UK is going forward with Project Oberon. Systems you at the BBC do nothing but praise. You don’t need Russia’s or China’s permission to go to space, and the UK is free to build their own manned lunar station. Tabloid envy is ugly.

I am calling bullshit here. You cannot trust the BBC

*Bat Boy is a creation of The Weekly World News

This site uses Akismet to reduce spam. Learn how your comment data is processed.